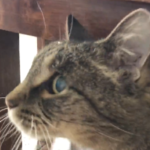 This is our Manx, Bobby Sue. We don’t know if she was born a Manx.

Genetics are the building blocks for everything from looks to body function to behavior. My goal with this blog, was originally to find harmless to mostly harmless mutations in a variety of pets and showcase the more interesting ones, but it seems that cats have an advantage when it comes to very interesting mutations with little to no side effects, so here are some of the more interesting anomalies that I came across:

Polydactyly—This refers to extra toes. Most cats have five toes on each front paw and four toes on each back paw, but it’s not uncommon for cats to have extra toes, especially on the front paws, and some cats have a whole extra set of toes! Some things to watch for though are nails that grow at odd angles and/or toes without bones. Combine a toe without bones with a claw that can’t retract, and the vet may recommend removal of the extra toe so it doesn’t get snagged.

Color Variations—There are three main unusual color variations. Vitiligo refers to a cat losing skin pigmentation and turning white over time. The second has to do with a black cat that looks white. If your cat has white hair with green or dark gold eyes and black eyelids, it is actually 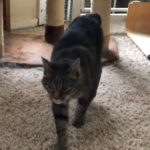 genetically a black cat with a big white spot! Lastly, a white cat with blue eyes is actually an albino cat or a cat without any pigment at all.

Manx—These cats are born with very short tails or without tails. It can be difficult to tell if a cat was actually born without a tail or lost its tail due to injury unless you know your cat’s entire medical history. Some Manx cats can have issues with their spine and back legs and may have issues with urination and defecation, depending on the severity of the mutation.

Ears—Scottish Fold cats have become more popular recently due to the cute effect of their ears folding over. This is due to a genetically-based cartilage defect. Two cats with folded ears should not be bred together though. One-fourth of the kittens born from two Scottish Fold parents would have scoliosis (curvature of the spine), joint issues, and other cartilage-related problems. Another ear-related issue is cats that seem to have four ears. There are really only two ears with an extra appendage on or next to their actual ears that looks like an ear.

Dwarfism—Aka Munchkin Cats, these cats have short legs and are super cute. There is some controversy with breeding them intentionally though, since they have a harder time running, jumping, and climbing than their full-legged counterparts. Other health issues, such as spinal deformities, bone deformities, and arthritis, may also be an issue, but the conditions that have appeared in Munchkin Cats also have appeared in other cats, so the jury is still out about whether the health issues occur more often in Munchkin Cats.

Janus Cats—These cats have two faces. Their health depends on the severity of the facial separation. Some do require extra healthcare. The oldest living Janus Cat lived to be 15 years old.

Two More Breed-Specific Anomalies—The first breed-specific anomaly is found in Rex Cats. They have adorable curly hair. Second, many Siamese cats have a condition called pendular nystagmus which means that their eyes seem to vibrate. I have seen this in a Siamese that I had. To know that it’s there, you almost have to hold his or her head still and watch the eyes (not something most cats enjoy).

Have you ever had a pet with an unusual genetic condition that wasn’t harmful to the pet? What was it? Did you have to help your pet by providing minor treatment? Let us know!