What to Consider When Getting a Pet–Part 2: Dyson

I love to take on the harder cases from really timid to fairly aggressive. I bought a purebred Siamese because she was so incredibly scared to interact with me when I met her. I have a thing for runts, regardless of the fact that reading about runts often leads to warnings about health issues. I love adopting rescue animals and discovering what makes them tick (as opposed to buying pets where you see the temperament of the mother and father).

With that said, look at this face! I have gotten so many compliments about this beautiful puppy. And he is adorable! I see the future of what good training will do for him. So what’s up with him? 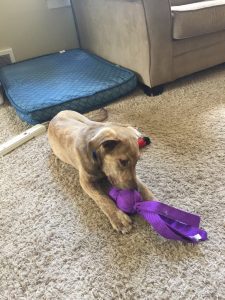 Meet Dyson. He is approximately four months old and was rescued from a reservation in South Dakota. He came to me from Heartland German Shepherd Rescue (HUGS) of Omaha, Nebraska. The dogs and puppies on reservations lead very hard lives before they are rescued. Often they have mange and other parasites and are underweight. HUGS specializes in German She 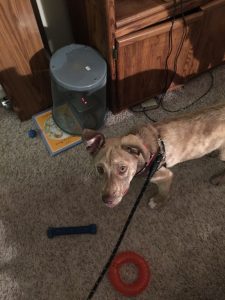 pherd Dogs but discovered the plight of these dogs and have been helping them since.

Dyson is a beautiful dog! He’s proportionate. He’s a brindle but his coloring is muted, rather than definite color differences. And his eyes continue that pattern, matching his coloring. He’s probably going to be a big boy—the vet estimated 70 pounds–, but not Great Dane or Mastiff big. I fell in love with him the moment that I saw him.

As I got to know Dyson, I realized that he is also a handful. He has no use for manners. Instead, he bites and pounces, and sits on everything, not in a mean way, but in a very demanding, authoritative way.

He barks at his toys. He barks at the wading pool when it’s empty. He barks at me when he wants something. (And if barking doesn’t work, he often chews on his hind foot. So cute!) I think that he believes that if he barks loud enough (and he is very loud), long enough, then he will get what he wants.

While he eats his food well, he is not especially food motivated.

Once something isn’t new anymore, he has no use for it. This includes treats. His attention span is 15 seconds, unless you tell him that he can’t have it. Then he can’t be persuaded to leave it alone without completely changing his focus.

He’s a bundle of endless energy, and, instead of giving in to fatigue, he ramps up and tears all over the house.

He has charged at me growling and snarling twice for the horrid fact that I was seeking to contain his craziness by holding his leash.

A leash and harness are horrible devices that force him to be contained. That means that he struggles and bites any time that anyone tries to put either on him.

He was supposed to be kennel confined after his neuter and I was given “calming meds” to help with that. He lost his mind being separate from the rest of the group and not exercising. The “calming meds” did not really work, especially after the first two days. I spoke with my veterinarian and decided that kennel confinement was doing more harm than good. As soon as the stitches were no longer visible, the cone came off, because not being able to itch was also horrible.

I adopted this absolutely gorgeous boy the day that he was neutered. Why would I adopt a puppy that was so difficult? Because he also loves his Wubba (the purple toy above); he loves to cuddle next to me on the couch and sleep (when he is able to control himself); he loves to race around the house and bark demandingly at his toys.

But also because he is not for the faint of heart. He needs an experienced guide to help him to adulthood. Anyone who isn’t familiar with dogs would be run over by his exuberance. That same exuberance, though, is what helped him survive in the harsh conditions of the reservation. He was thriving there. But to live with people, he needs to be taught the value of self-control, of being a part of a pack, of following a leader. Once you understand why he is who he is, you can help him learn to channel that energy.

My hope is to help people understand that “cute” should not be the only consideration when picking a pet. Does the pet fit your lifestyle? Your energy level? Can you commit to the dog for its life (10 to 16 years)? Are you willing to put in the work and the time to mold your pet? Are you willing to seek help the moment that you discover that this pet is too much for you to handle? Are you willing to responsibly rehome the pet if it’s the wrong fit?

So please consider carefully before you adopt or purchase a pet. The internet is full of easy-to-access resources. Other potential resources include, but are not limited to, pet rescues, shelters, kennel facilities, animal behaviorists, trainers, responsible breeders, pet stores, book stores, and the library. And get help as soon as you find yourself unable to correct something. Letting a behavior continue, can lead to other, more serious issues and/or “bad habits” that are then harder to break. Even trainers meet dogs that they need help with so please seek help and do your research before you take responsibility for a life.